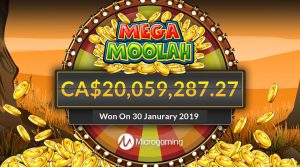 There’s someone out there that since yesterday has been walking around with a pretty big smile on his face. We don’t know yet who the lucky one is and not even where he or she comes from. But this person won on the 30/01/19 an insane jackpot win of no less than 20,058,463.58 of what seems to be Canadian dollars. Although, this information has not been released yet.

On September 28 the record was broken with someone winning 18,910,668.01 Euros on this unbelievable progressive jackpot. And by that, breaking an all-time record of jackpot wins. And even though the amount won yesterday is bigger, until Microgaming (the company responsible for this game) releases all the information, especially in what currency the jackpot was won in, we won’t be able to tell with a 100% accuracy which of the wins is bigger and was the record broken yet again within only 4 month.

Here’s what we do know. The win was 20,058,463.58, which means that at the point the jackpot was hit this was the amount it was standing on. We also know that the mega moolah jackpot is valued by pounds since Microgaming is a UK based company. The last piece of the puzzle Is, the amount won is in the currency in which the bet was made and currently the ticker stand on around 8.5 million in pounds. So whoever won the jackpot won somewhere around 11 million pounds which are, in the currency he was using, 20 million. All of which led us to the conclusion that the winner is from Canada

Mega Moolah has made a lot of peoples dreams come true and this winner is joining the club as of yesterday. I mean, who among us wouldn’t want to be this guy who wouldn’t wont to win an insane amount of money by just playing a slot game. Well for this unknown individual, this Is no longer a fantasy. And who knows, you might be next.

The lest mega moolah big wins. Times dates and amounts