Pragmatic Play Is Set To Release The Triple Jokers Pokie In June 2019.

This is a Vegas-themes pokie that features stacked wilds, re-spins and Free Round Bonus. While this will be a new release by the developer, it is not trying to feature modern graphics or features. It is mostly a classic-style pokie with jokers as the main characters.  This is a game with a decent RTO and good potential.

Players will be looking at a classic layout, presented in 3x3 reels and 5 active play lines.  This is the kind of game that uses piled symbols for almost everything, meaning that you get several wins at a time or you don’t win anything from it.  The payouts are good—up to 1, 000 the initial bet or $25,000.

The game’s theme is basically classic. The Joker is a character used in many games from the past along with other symbols which are used in Triple Jokers. The list of regular symbols that will be used in this game include Gold bells, Triple 7s, a Bar Logo and the four card suits. Quality-wise, this is not a bad game though it is not a modern release. 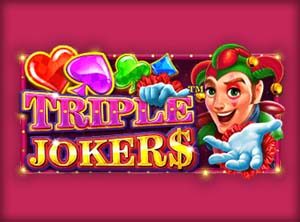 For such a game, having an extensive list of features is not really an option. Gamers tend to expect a different type of experience, and Triple Jokers manages to keep things simple enough for the most part.

The Joker is the star of the game and pays most. Land 3 of these in a combination and you are rewarded with a prize 60x your wager. The Joker symbol comes with just a single feature, but it has the potential to be a cracker. The symbol will turn into a wild only if it can appear fully stacked on even one reel. At this point, it can get you wins from 300 times to 1,000x.

During the re-spin, until you win feature the payouts awarded from 3 jokers increase. A combination of three on pay-line awards you 200 x your stake rather than the 60x stake offered in the main game. If you are lucky enough to fill all three reels with stacked wilds, you can win a payout of 1,000 times your bet.

When it comes to the gambling system, Pragmatic Play has remained true to their customary choices which they use both in their modern and classic pokies. In the Triple Jokers, players are presented with 5 active lines. The wager varies between $0.01 and $5. If you choose to use 50 coins of $ 0.50, you get to wager up to $25 per spin. The minimum bet allowed is $0.05.

When it comes to the prize, players can get a 1,000x on the line bet by getting a combo of five wilds.  This is easy as the wilds are stacked and you can get a screen filled with the symbols. This could win you as much as 1,000x the total bet.

Pragmatic Play stated that the RTP of this game will be at 96.51%. This is a decent amount for a modern pokie machine especially with a game with three reels.

The combination of straightforward gameplay and a simple design will contribute to Triple Jokers being a playable pokie. This is the case especially to those players who like volatile action.  The game has a high variance, and you could see your coins quickly disappearing. However, if the Joker is on your side, you can win big from the game.