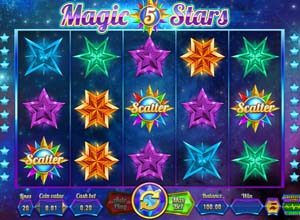 It’s only the third month after we began the New Year, 2019. Gamblers were expecting new slots, pokies from various gaming operators. Truly, we’ve had many games that had launched this year from many gaming operators. One of them is Wazdan.

Here is the good news from Wazdan. It’s jubilation for Wazdan to welcome gamblers to test their latest title they’ve named Magic Stars 5. Magic Stars 5 is an inventive, elegant and wildly entertaining online slot that players can't resist to play. The game takes the players to the beautiful world of stars.

This awesome game was launched officially at ICE London early last month. It’s a game that’s jam-packed with great prizes as well as giving its players with an experience they’ve never had, hauling them to the glittering night sky.

Additionally, this slot game has 5 reels and 20 paylines. Yet not enough, it comes with crisp graphics, superb sound effects, smooth animations, and rewarding gameplay experience.

The game raises the player's goosebumps by allowing the top quality players to unearth the scatter symbol as often as possible. The most interesting thing about the scatter symbol in Magic Stars 5 is that it can pay you at whatever position you are on the reels. Sounds amazing? Of course.

To make it more interesting, in case you win the win is accompanied by high quality and amazing light effects that confirm that you’ve landed a big win. To add on that, the developer offers the players with profound levels of excitement while playing the game. Doubtlessly, the game boosts customer satisfaction while creating overall engagement.

We are not yet through. The Wazdan’s Magic Stars 5 can be played on key Casino partners. It’s fitted with all stunning, unraveled and innovative, unique Wazdan features which include, Unique Gamble feature, Volatility Levels™, Double Screen Mode recently introduced Big Screen Mode, Ultra Lite mode and Ultra Fast Mode.

Wazdan cares whichever device you are using. That means that you can enjoy playing it on your desktop or use mobile devices such as smartphone and tablet at your comfort. Isn't that amazing?

The Wazdan’s head of sales, Andrzej Hyla commented on the launching of the game saying that they are thrilled to launch officially Magic Stars 5 and they lacked words to explain how pleased and encouraged they were when they received a successful reception from ICE London earlier last month.

He continued to explain how Magic Stars 5 is outstanding saying that they were proud with the slot game for adding to their portfolio. He compared the Magic Stars 5 slot game with other table games, 110 HTML SLOTS, and video pokers saying that Magic Star 5 combines the three phenomena and which are fully packed with outstanding Wazdan features that outnumber their competitors.

Wazdan is a popular game developer that produces super casino games players can’t help but enjoy, have fun and give them a truly an omnichannel experience. What will amaze you about Wazdan is their progress in the past 12 months. Yes, they have introduced new games, and they are also partnering so fast and frequently.

And if you think Magic Stars 5 is the first slot title for Wazdan this year, then you might be not in the right path. They first introduced Space Gem this year.  In 2018, they developed 19 online slots such as Fruits Go Bananas™, Black Hawk Deluxe, Slot Jam, Hot 777 Deluxe™, Mayan Ritual™, and Los Muertos™.

You won't believe that there have been some partnerships announcements involving the top-level popular operators such as Microgaming, GoWild gaming, River iGaming, Lapalingo, BetHard, TibBet Casino, Videoslots, TPG Asia and others.