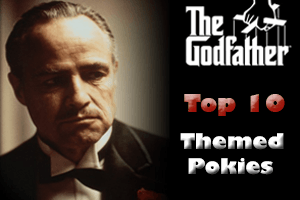 Love watching movies and playing slots? there could be nothing better than combining the two. At online casinos, you will find numerous pokies based on popular movies. Licensing agreements with movie producers empower game developers to create impressive pokies which feature authentic video clips, images and music from featured movies. You will also find that movie-themed pokies boast some of the most imaginative and unique features that bring the theme to life.

This article introduces you to the top 10 classic Action Movies-themed pokies that you can play online.

The 1980’s Top Gun is a classic of our time, featuring fast-paced action and outstanding aerial acts, combined with lots of humour and a timeless soundtrack. The official licensed Playtech pokie brings the cult classic into the 21st century with quality graphics and exciting features.  You will come across key characters from the movie represented by symbols, including Charlie, Iceman, Stinger, Jester and Goose.  You will hear the famous Take My Breath Away when spinning the reels that give an authentic control to the theme. Dogfight Wilds are the game’s key feature, with the wingman flying in to add extra wilds with a possibility of extra 1-15 wilds in any spin.  The game also has Danger Zone Free Game that boosts the Dogfight Wilds.

Gladiator is the movie that made Russel Crowe famous.  He played Maximus, a Roman General who was betrayed and his family killed by an emperor’s corrupt son. Maximus goes to Rome as a gladiator to seek revenge. In the Playtech video pokie based on this movie, players can step into the arena and relive the story.  The game features five reels and 25 paylines with some of the lead characters from the movie including Lucilla, Commodus, Gracchus, Proximo and Juba.  The game also features authentic sound effects and clips from the original movie, which solidifies the connection between the game and the movie.  The game features a Coliseum Bonus that reveals multipliers, free spins, extra wilds and scatters.

This title is part of Playtech’s DC Super Heroes Jackpot Series. The game is centred on the 2013 box-office superhero movie, which restarted the Superman series and recaps the story of the heritage of the Man of Steel. The game features colourful graphics, intense music and a variety of special features including; Battle for Earth Free Games, shifting wilds, the World Engine bonuses and Krypton free games.

Terminator 2: Judgement Day narrates the story of Sarah and her son John as they are hunted down by T-1000. The game also captures the very being of the movie with characters and video clips from the film.  It features free spins, which increases the number of paylines to 1024 ways to win. There is also the T-800 Vision mode that is randomly triggered and rewards bonus win amounts.

The Hitman Movie series has been a huge hit with movie lovers around the globe and it has not been different when it came to the online video pokie game.  The game effortlessly incorporates essential aspects of the film into the game bonuses and features.  An example is the Contract Bonus Feature where gamers need to execute one of the targets to get awarded with random prizes.

This is a title by Microgaming, which is unmatched when it comes to graphics, bonuses, gameplay and the incorporation if actual video clips from the film.  Gamers will be able to appreciate the new features including Extra Wild Blasts, Heat Seeking Wilds, the Symbol Scramble, and the Super Stacked Wilds. All these have been seamlessly combined with the normal feature like rolling reels, expanding wilds and stacked wilds.  These bonus features make the game a popular choice for both pokie fans and Batman lovers.

While the film was a bit divisive, the Justice League pokie certainly stands out for all the right reasons.  The major attraction here is the huge stakes.  The potential wins from this game are 2000 coins, which is quite impressive. You should, however, play with caution.  The game also features a progressive jackpot and great symbol of the cast heroes which include Superman, Catwoman and the rest of the League.

There can only be one Highlander, but luckily this pokie is not limited to a single winner. There is a max win of over 100,000 coins, which is good.  It might be a classic film but the sound and the visuals have taken the entire Highlander cast into the 21st century.

NetEnt has outdone themselves with this exciting game that is based on the murderous rise and fall of Tony Montana. The Say Hello to My Little Friends bonus game is the epitome of this game, letting players pick up a firearm to protect Tony’s mansion from the invading mob.

This is a five reel online video pokie based in the cult classic and highly rated Mario Puzo’s novel. The game offers players with a choice of a prize of 2500 coins or a progressive jackpot.  The game consists of multiple bonus levels and lots of exciting features.

If you wish to find a great casino to play these online pokies, make sure to check out our home page where you can find the best online pokie sites