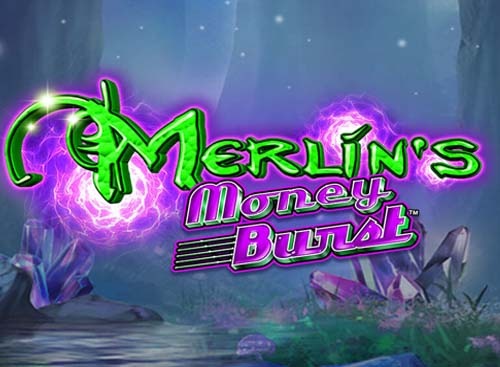 NextGen has made Merlin a popular character in its pokie games. The firm decided that it was time to reintroduce Merlin in its latest pokie game: Merlin’s Money Burst.
The game was developed in cooperation with WMS and delivers a unique gaming experience. If you are familiar with WMS games, you will definitely think of Glitz, Bruce Lee, or Queens Knight lias the all have similar gaming mechanics with Merlin’s Money Burst. The game is playable across all devices from as little as 0.30 to 62.50 credits.

The magic-themed game is presented on 4 single reels wet in a 2x2 gaming grid together with 3 reels filled with four symbols and 60 paylines.

The game starts off with players being shown a charming dark forest in the background as the reels come into view.

The game runs pretty much like the standard pokie game. Punters try to match the symbols to get winning combinations. The game features low-value symbols that are represented by the usual 10, J, Q, K, and A card suite. It also features numerous high paying symbols that include money bags, hourg lasses, spell books and potion bottles. The spell books are the most paying symbols—they pay 8.33x the stake for five in a line. The Merlin icon is the wild symbol. It substitutes all other symbols except the scatter. The wild gives you 83.33x the total stake for five on a payline.

The game also comes with the SuperBet feature that enhances the player wagers. Based on the enhancements that a player gets, one can win pretty big. The feature has five levels and the highest level can add a lot to the player’s stakes. However, when it gets to level 5, players get a 10x multiplier when the Merlin symbols form part of the winning combo.

Players are also gifted with three other bonus features:

The Held respins feature is activated when reels 1 and 2 have matching symbols. Players are then given five respins with the first two heels held.

The Merlin’s Free Games feature is activated when you land on three or more scatter symbols. This gives you 10 free respins and changes these symbols into wilds. The feature can be re-triggered. If you get a combination of triggers, you receive respins and the first two symbols on the reels become wild.

The Merlin’s Wild Spins is triggered when reels 1 and 2 contain similar symbols and 3 scatters on 3 reels including reels 3, 4 and 5.

Based on the selected bet level, the game will have different ranges to play with and various multipliers to apply.  You must note that the higher the bet level, the higher the RTP so it is good to bet as much as you can.  The prizes can be impressive, but even more so when you are a high level and a 10x wild multiplier is in place to boost your wins. At this point, you are looking at a jackpot of 10,000x the bet, which translates to $625,000.

The RTP varies and for the 5-bet levels, players are presented with five different proceeds to consider. The best level is 96.75%, which is offered at level five while the lowest is at level 1 (95.75%).  This is quite a huge difference and it is recommended that you stick to the highest bet level as you can afford.

Merlin’s Money Burst is a rather blunt fusion of the classic WMS Bruce Lee mechanic and Merlin Series. Basically, the two are the same with the only difference being the SuperBet feature that has been included in Merlin’s Money Burst. The feature has made the game more volatile.